Thirty years ago today I joined the national news media. Why am I highlighting this bit of personal history considering that a record two in three Americans don’t trust the media? Because I want to do my part rectifying what may be the media’s greatest failure, one that dovetails with my own hardest-learned life lesson.

It’s something I could explain right here in the second paragraph. But then why would you keep reading?

Did that sound arrogant? Am I valuing your time less than the satisfaction I would get from enticing you to read my whole story? Sure, I came to embrace the news media’s arrogance problem early in my journalism career, during the 10 years before I went to New York 30 years ago to edit national news for The Associated Press (AP). 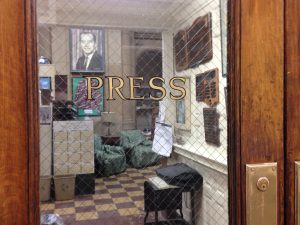 I still remember the stunned look my political science professor at Duke University gave me during a class discussion on fairness in the mass media. I was editor of the campus daily, and took the position that all journalists strive to be objective and fair because that’s a value built into their profession. Like a doctor who couldn’t conceivably have any motivation not to properly cure or treat your illness, the journalist would set out to tell a fair, accurate and complete story every time. The professor clearly found this naive.

I still remember a then-surprising initiative by my bosses at The Charlotte Observer several years later to inform the newsroom staff that readers considered journalists arrogant. This sense that “the Fourth Estate” had become elitist and isolated tied in with a “civic journalism” movement that promoted more interactivity with readers. This was long before the Internet eroded the financial base of newspapers. This was a time when commenting publicly on a news report involved mailing a letter to the editor, and hoping someone called and told you your letter, or an edited excerpt of it, had been chosen for publication. Readership studies at the time were aimed at making already profitable newspapers even stronger, but they were already picking up the seeds of today’s discontent with the media.

Even then, some newspaper readers reported annoyance with long articles that wasted their time, continuing on to other pages — usually jumping from the section in your hands to the section Dad had taken into the bathroom. And somehow not everyone found it relaxing and rewarding to entertain and inform themselves by handling awkwardly large sheets of paper with ink that rubbed off on their clothes and furniture. Broadcast and digital news delivery promised more immediacy and less smudge but often repackaged the same news with new kinds of clatter and clutter.

So it was with a mix of cynicism and pride that I arrived in New York at age 29 to become a national news gatekeeper. I sat in a crowded fourth-floor office in Rockefeller Center at a clunky computer terminal next to a dot-matrix printer spewing out truncated versions of stories written or rewritten (curated) by AP staffers around the country. I worked mostly nights and overnight with just a few colleagues sharing the workload, the Chinese takeout food and banter ranging from morbid humor to serious debate about fairness and judgment. With the incoming stream of stories vastly outnumbering the capacity of what we could edit, transmit and match with photos, the slips of paper representing each story queued up in the computer could pile up quickly. So do you know how I picked the right few stories, apparently well enough to keep my job and get promoted?

No, probably you don’t know because the news industry has always been loath to discuss “how the sausage is made.” A few elite newspapers have an ombudsman or public editor, and the industry doesn’t mind a “Spotlight” on its triumphs. Editors explain themselves in an occasional column, blog or speech. But despite some recent movement toward storefront newsrooms that welcome in the public, newsrooms generally engage with readers, or viewers, the way posh party-goers engage with the banquet waiters passing trays of hors d’oeuvres. (Where are they? What have they got for me?)

As a national news gatekeeper, I evaluated the incoming stories like a doctor treats a patient—on a battlefield. It was triage, with overtones of fear and hopelessness, and some adrenaline-stoked joy. The fear was missing something important and being second-guessed. The hopelessness came in when a story was worthwhile but too weak to be saved. The public got to know the survivors, and we didn’t talk about the ones that got left behind.

Then along came bloggers, Internet commenters, politicians and pundits scoring partisan points by attacking “the media” for not covering this or that. Annoyingly, these self-appointed critics often stick to their own areas of expertise where they can make good points. News organizations, with thin staffs and thinner skins, find it easier to deflect the criticism than use it as a teaching moment, for themselves and their audience.

“Report the story, don’t become the story,” is a tenet of journalism. I’m one of those private people who hates being the center of attention and probably got into journalism because it was a way to be in on the action from the sidelines. A lesson I learned with great difficulty is that people only love you when they get to really know you. The media need to cultivate some love by being more transparent.